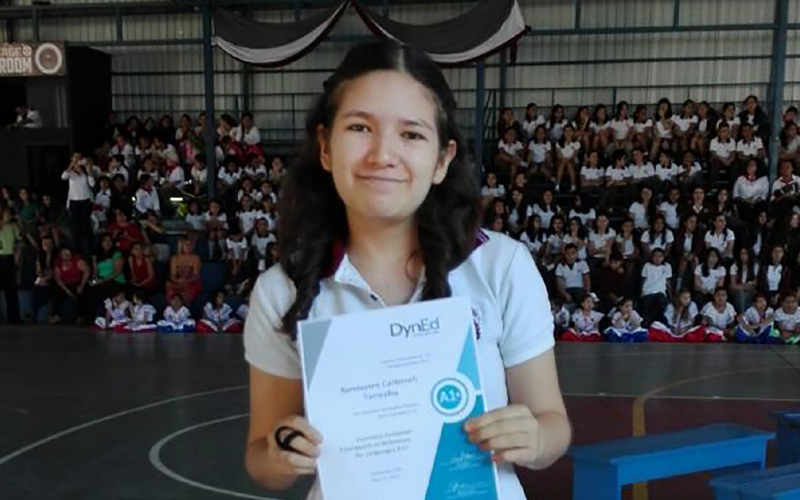 Meet Nandayure Carbonell, a high school student from Colegio Santa Ines in Heredia, Costa Rica. Nandayure began studying with DynEd in early 2016, as part of her school’s English program.  Although she reports that her studies started slowly at first, she quickly learned to enjoy them. “Now my English is way better. I can grab a book and start reading it without the help of a dictionary,” says Nandayure. “I now understand many things that I was never taught in normal [English] classes,” she adds.

DynEd Analytics show that Nandayure has been working very hard since February 2016, when her initial DynEd Placement Test level was 0.7. After 93 hours of study with DynEd, she not only has the highest Study Score in her class, but she has also progressed to a 2.7 level on the DynEd Placement-Test scale. In addition, Nandayure has gotten outstanding marks on her Mastery Tests. All of this hard work has raised her English level to an A2 skill level, as measured by the Common European Framework of Reference for Languages (CEFR). “An A2 skill level is impressive,” says July Cano, academic advisor for Edutech de Centroamérica, a DynEd’s representative in the region. “It’s high enough for a student to be able to study high school in the U.S.”. “So far I’ve gotten two [DynEd] certificates this year and am working on the third one; my effort is paying off,” said Nandayure proudly.

DynEd would like to commend Nandayure on her perseverance and hard work. We know learning English as a second language is not easy, but with determination and DynEd’s goal-based courseware, attaining your goals is entirely possible!